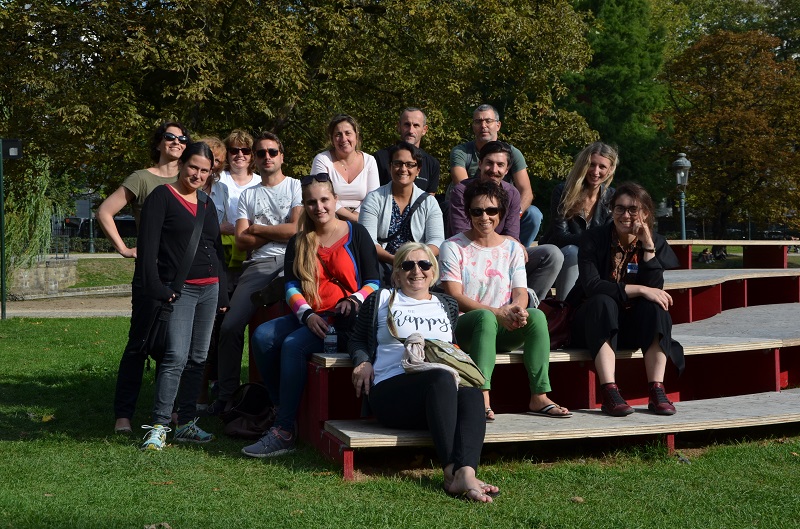 In mid-September the Urban Diversity team went on a study trip to the Netherlands and Belgium, which are known for their multiculturalism and their support of good practices of migrant entrepreneurs. We were eager to collect interesting ideas, which could be implemented also in our countries.

First, we visited the Dutch capital. Our first stop in Amsterdam was Rederij Lampedusa – a collective that gathers members from Egypt, Eritrea, Syria, Sudan and the Netherlands and combines Dutch passion to navigation with the experiences of migrants. A collective organizes the navigation along the Amsterdam canals with two Syrian fishing boats, in which migrants sailed to the island Lampedusa in 2015. While touring, the guide presents his migrant experience and presents Amsterdam as shaped by foreigners. Rederij Lampedusa helps migrants to integrate in the society and to develop their business ideas. It also contributes to accepting and understanding diversity in the Dutch society.

The second day we visited two interesting places. Our first stop was a non-governmental organisation Lola Luid. The municipality let her use the premises of the old empty school, which became a working place of several entrepreneurs – painters, writers, people who organise workshops for children and help with studying, film festivals’ organisers, wood handlers, bag makers, hairdressers, perfume mixers and others. Before Lola started its activities, its creators asked inhabitants of the neighbourhood about their needs and wishes. Lola managed to establish good relationship with the neighbourhood, which mostly offers home to people of Turkish and Moroccan nationality. It offers them various workshops, connects them, integrates them and offers them the best coffee in the neighbourhood.

Our second stop of the day was another non-governmental organisation Centre de Meevaart. The idea for the centre arose during the economic crisis. Creators of the centre went on the streets and were asking people (183 different nationalities live there) what they need and what they want for a better life quality. Three years later they got the permission to use the building, which gathers people and encourages them to participate in various activities. More than 15.000 people use the building on a weekly basis, most of them are volunteers. The centre also organises trainings in the field of building management and care for elderly and helps individuals without the officially recognised diploma to obtain one and later to find a job. Their trainings are officially recognised by the state’s educational institutions. The centre also supports entrepreneurship since they believe that not all people are suitable to work 9-17h, but they are very talented – for example Eritreans make super clothes. The centre has a positive influence in the neighbourhood, helps people to integrate and supports the entrepreneurial ideas of its users.

On the third day our trip led us to Brussels. First stop – European Parliament, where an Austrian assistant presented the work and decision-making process of the parliament, as well in the field of migrations. Our next stop was the Regional representation of the region of Styria in Brussels, where we were welcomed by the representatives of the mentioned representation and the Permanent Representation of Slovenia to the European Union. They explained us that topic of migration is the topic mostly discussed on the national level, however, local and regional projects, such as Urban Diversity, are very important.

We ended the day with the visit at the We exist organisation. It was established by the 24 years old Syrian boy Obada, who came to Brussels during the so-called »migration crisis« in 2015-2016. He reached Brussels via Greek islands, Hungary, Austria and Germany. He waited for four months for his status to be approved, another four months for a small apartment. He was looking for a job, but could not find one due to his refugee status. By pure chance he attended the conference where the representatives of the European institutions and various non-governmental organisations discussed the integration of refugees into the labour market. He started connecting people and founded the organisation »We exist«. It provided catering for various events as well as cooking classes; some restaurants allowed them to use their premises on the days they were closed. He notices that people started accepting them and the divisions between us/them is not that often anymore, however, at the end of the day he is still a refugee. And people still expect cheaper services from the refugees. At the end he told us the receipt for a success: »I succeeded because I wanted to succeed, because I worked day and night and went through every idea million times. Because I do not complain that I have to work and I believe in what I am doing!«

The next day we went to the part of the city, which is known for its high proportion of migrant population. Here, a company Microstart is located, which offers micro loans to entrepreneurs, who are unable to get a loan at the bank. And more and more people fall into that category, realise employees of Microstart. In the least advantageous position are migrants, whose degrees are not recognised in Belgium and whose French or Dutch are not yet on the professional level. However, the company pledged to help everyone to develop his or her entrepreneurial idea. They offer loans between 500-15.000 EUR with a slightly higher interest rate since the projects they finance are usually more risky. The company also helps potential entrepreneurs in obtaining the managerial exam, which is a precondition for founding a company in Belgium. The company can count on the support of several retired expert volunteers, who help the entrepreneurs gain relevant knowledge and skills. Employees of Microcredit do a lot of field work and are in constant contact with the loan recipients so they can help them if the need arises and follow the needs of the neighbourhood. After the official presentation we walked through the neighbourhood and visited the loan recipients: Nigerian hair dresser, Pakistani telephone store, Bulgarian bakery, a Nigerian grocery shop and an African restaurant. In the latter, we also tasted Africa in the heart of Europe.

We ended the study visit in one of the most famous Brussels quartiers – Anderlecht and the society Arnibel, which brings together people coming from the African country Niger. As many other diasporic societies they support compatriots who move to Belgium. Their work encompasses several fields, such as accommodation, language learning, integration in the labour market, support of entrepreneurship, cultural events and emotional support. The majority or the society’s members owns its own company. The president of the society presented its work and premises, which are also main point of socialising and various activities through the whole day.

Five days passed quickly. We returned home full of new impressions and findings. Now it is time to implement them in the home environment.

Fotos of the study visit can be found in the gallery: http://www.urbandiversity.eu/sl/galerije/study-visit-amsterdam-brussels/